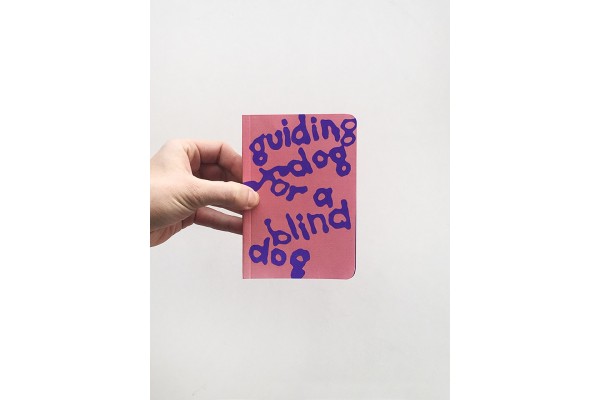 The news is fake sometimes and the horizon’s relative. The Flat Earth movement thrives while people are investing in competitive drone racing and building dwellings in the ocean; we started delivering lectures in saunas as works of art, but it's still paintings that bankers buy. Normality has always been crafted into a condition by the interested powers and parties, made a brittle instrument to mark what’s abnormal, unreal. The brace the word sits on, however, is of mesh, liquid. It’s nebulous. As soon as it designates a stable boundary, the demarcation jiggles and splits like foam. In from this wet threshold walks a guiding dog.
The volume stands as a collection of dialogues with artists, poetic texts, and a catalogue for the exhibition A guiding dog for a blind dog, held at Centre for Contemporary Art Futura in Prague in 2018. Weaving into and through its delightful imagery are Nat Marcus’s written works, in which he individually relates to the concrete pieces in the exhibition. More often than not, the relation may seem arcane and cryptic. His texts may read like a poem or a piece of prose; they may simulate a newspaper tearout found on the street, or present an excerpt of an academic text. Perhaps its intention could be that of a book of incantations or a platter of delicatessen, as an object to contain this multitude within and without the exhibition space.
The book, we hope, issues invitations. The reader is invited to delve into the Fellowship of Citizens, Saemundur Thor Helgason’s lobbying group and lottery, which advocates for a universal basic income; or the like-farms and the mirrors scattered throughout Instagram, as u seen through the eyes of Tomasz Kobialka. Josefin Arnell’s film Mothership Goes to Brazil prompted a conversation about the economy of healing tourism and its invisible borders, while Sóley Ragnarsdottir speaks about the space of a gaze between human and animal. Valinia Svoronou leads us through a terrain of roses sent to space, the Greek economy, one’s will to escape, space migration. Nico Walker lets us on in the teeth-whitening chart included in her styled sculpture My father has full sleeve tribal tattoos., Andrew Wagner leaves us to speculate if Plankton, the character from SpongeBob, is in fact queer, and Nat discusses a salty-oily focaccia from Genoa and other mouthwatering snacks with Federica Partinico.